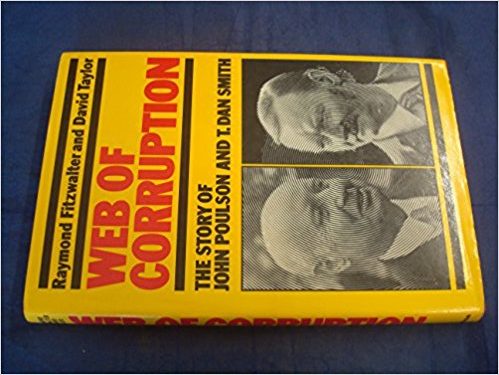 The Web of Corruption

FROM LONDON REVIEW OF BOOKS –

Anyone in search of an object lesson in how to write about crime need look no further than Web of Corruption, which tells the story of John Poulson and T Dan Smith. Raymond Fitzwalter and David Taylor took eight years to research and write their analysis of the most far-reaching corruption trial of this century. The opening summary is startling.

Of those prosecuted in connection with Poulson twenty-one were convicted on corruption charges. There were nine councillors, four officials from nationalised industries, three civil servants, two local government officers, a journalist, a builder and the architect of the whole conspiracy, Poulson himself. Three hundred people were listed for investigation and many of them lived in fear until the police called it a day. Some offenders either died or left the country before the police could move in.

The strength and integrity of the book lies in its exhaustive factual base and its refusal to be drawn into the coy intimacy adopted by so many popular crime exposés. It draws attention to the element of paradox in both of its main subjects. In the case of Poulson, it notes his genuine Methodism and the apparently spontaneous generosity which co-existed with grandiose dishonesty, avarice and graft. In the case of Dan Smith (whom the authors understandably find the more interesting of the two), there was a conflict between the socialist visionary and the squalid con-man operating in the front of the PR boom.

Yet this is primarily a book about ‘the system’, and the gutlessness of supposed guardians of the public mores. The first part of the book offers a detailed analysis of the irresistible growth of the Poulson empire. It moves at a blistering and breathless pace through the town halls of the North-East and the inner committees and cabals of statutory authorities, unions, the construction industry, great nationalised enterprises including the National Health Service, British Railways, the Coal Board and, finally, the Scottish Office. In doing so, it dramatically illustrates, not only the size and the virility of the corruption which spread into public life in the wake of the property bonanza, but also the complex motives and backgrounds of corrupted and corrupt. Between the feudal union boss, Andy Cunningham, the King of Durham, the gifted, charming civil servant George Pottinger, and the compassionate hospital administrator George Braithwaite, there was little in common except a willingness to sell the stewardship of their offices for the backhanders of an unqualified architect. That they should do so is shocking: the process by which they did so is essential reading for anyone interested in the operations of power in this country.

The heart of the book concerns the action, or inaction, of professional and public bodies when confronted with established facts relating to the conduct of their members, and it exposes the feeble and dishonest conduct of Parliament when it learned of payments made by its own members – to Reginald Maudling, Albert Roberts (Labour) and John Cordell (Conservative). Considering the report of the committee which had censured Maudling and had described Roberts’s behaviour as ‘inconsistent with the standards which the House is entitled to expect from its Members’, the Commons refused to adopt it. In a memorable passage, the authors remark: ‘Having let Maudling off the hook, a somewhat larger Commons majority showed a similar leniency towards Albert Roberts. And so the curtain came down on Britain’s most insidious post-war scandal. After five years of intense scrutiny it ended with a whimper, the final explosion neatly sandbagged by the elected guardians of the public interest.’

Much British graft stems from the obsessive secrecy which surrounds relationships between public servants and contractors. The authors, both outstanding journalists, might also have said that this helps to account for the abject quality of mass political journalism: if the real facts of power and of its use are concealed, it is hardly surprising that the media should resort to the speculative trash which passes for political analysis.